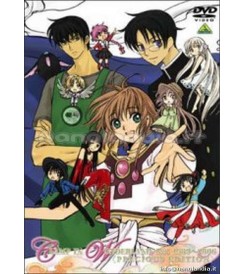 Quick overview
Audio:Featuring two separate videos, the audio on this disc varies. The audio for the original CLAMP in Wonderland does sound very slightly fuzzy, not due to low quality, but just to age. The two songs used still sound excellent, and are presented in their original Dolby Digital 2.0 stereo format. For CLAMP in Wonderland 2, the audio is much crisper on both songs. The audio comes through clearly

Audio:
Featuring two separate videos, the audio on this disc varies. The audio for the original CLAMP in Wonderland does sound very slightly fuzzy, not due to low quality, but just to age. The two songs used still sound excellent, and are presented in their original Dolby Digital 2.0 stereo format. For CLAMP in Wonderland 2, the audio is much crisper on both songs. The audio comes through clearly on both sides for all four songs, though, allowing the viewer to be immersed in the music.

Video:
For the original CLAMP in Wonderland, the video quality is slightly less than what you would expect from a modern-day DVD, as it is over 15 years old and has not been digitally remastered. There are places where the picture appears to be slightly grainy, although the colors do not have a washed-out look to them. Given the age of the source, the picture quality is still exceptional. This one is presented in the standard 4:3 aspect ratio. On the new CLAMP in Wonderland 2, the video is crystal clear with vibrant colors throughout. Also, it includes a completely CG-rendered merged Rayearth, and several places where they used digital technology to animate magical circles in ways that would have been impossible with cel animation. There is a very high level of detail on all of the character’s faces, even when they are fairly small in part of the background. CLAMP in
Wonderland 2 is presented in 16:9 “vista size” format.

Packaging:
I couldn’t have asked for nicer packaging than this extremely beautiful case. The DVD box itself is approximately 1.25” thick, the bottom of the inside’s also being a digipak to hold the disc itself. The box, which is made of rigid cardboard with a glossy finish, has a picture with new artwork featuring myriad characters from the CLAMP universe all together in one collage, some being full-sized and some chibi. The inside of the box has small images of a plethora of scenes taken from both video clips, all with a pink overtone. A semi-transparent wrap-around obi gives the specs for the disc on the back, and a brief description of the contents of the box on the front.

Menu:
Despite how nicely everything else is done, the menu is extremely plain. After watching the obligatory warnings about copyright infringement, you get a splash screen which shows the cover art from the box and a small pink bar down at the bottom of the screen with two selections (CLAMP in Wonderland; and CLAMP in Wonderland 2 1995-2006). There is neither animation nor music for the menu, although it does not remain as a “paused” menu. If, after approximately four minutes, you fail to make a selection, the disc stops itself, and you have to start it up again. It is very simple and easy to navigate, however, as there are only two selections. It would have been nice if they had included a “play all” feature, though, as you have to manually select to play the second one after the first one is finished. Also, there is no submenu dividing the music clips from the ending credits.

Extras:
While there are no extras on the disc itself, it more than compensates for this with the phenomenal inserts and extras. The CLAMP in Cardland promotional card features the same image as the front of the box, and comes displayed in a silvery-mauve cardboard frame. The special booklet, which is 11 pages, has two short comics by CLAMP (one featuring Mokona Oujou from the ending of the original CLAMP in Wonderland, the other featuring a crossover between Kobato and CLAMP Gakuen Tanteidan. It also has a message from CLAMP printed inside, as well as facsimiles of hand-written messages from Seki Tomokazu, Yukana, Kumai Motoko, and Inoue Kikuko (who even included her own drawing of Mokona, along with an apology to CLAMP for how it looked!). The real treat, though, lies in the 248-page “booklet” which is included. The booklet features a completely different wrap-around picture by CLAMP, depicting many of their characters enjoying a relaxing picnic of sorts where it is day on one side, but blends into night on the other. As in the video itself, there are characters from several of their different series all intermingling and having a good time, although Mokona and Modoki are definitely enjoying making mischief. The booklet itself contains the complete storyboards for both video clips (including the ending credits for both). Also, before the storyboard breakdown for reach, there are several pages of color pictures taken from the final version that go, in order, through the entire video and tell you who all of the characters are and from which CLAMP series they first appear. Considering that the characters portrayed in the two videos span 18 years’ worth of CLAMP characters, this can be extremely useful, especially for scenes where a character just flashes by the screen.

Content: (please note that content portions of a review may contain spoilers)
Whether you have seen the original CLAMP in Wonderland or not, this is a fantastic disc for anyone who loves CLAMP’s works. Fans of CLAMP’s older anime and manga series are going to see a lot of favorites in the original CLAMP in Wonderland, which focuses heavily on X, CLAMP Gakuen Tanteidan, Duklyon, Tokyo Babylon, Seimaden (RG Veda), and Rayearth. Despite its being a music video, there is a simplistic plot to follow based on the lyrics to the song (“Anata Dake no Wonderland”), though it is still very enjoyable, even if you don’t understand Japanese. Also befitting a CLAMP series, Tokyo Tower meets its untimely demise during the course of the video. Both songs for the original (Anata Dake no Wonderland and ”Anata” ga “Shiawase” de Aru Youni) are performed by Hirotani Junko. The highly-anticipated new CLAMP in Wonderland 2 1995-2006 features an entirely new set of animation. As denoted by the title, it focuses heavily on the newer CLAMP works which have been released since the original CLAMP in Wonderland was made, including those which have never been made into an anime (such as Kobato). However, it does include virtually all of the main characters from all of their series. The action is not quite as fast-paced throughout the whole of the newer film but, unlike the original, has a different kind of plot to it. While the original followed the premise of Lewis Carroll’s “Alice in Wonderland” (with Kamui’s falling through a hole in the ground at the beginning), the new one follows Mokona and Modoki (from the Tsubasa and xxxHolic worlds) as they traverse various dimensions to visit different CLAMP worlds and characters. There is quite a lot of overlap, allowing characters from the different series to interact, just as they did in the original. One of my personal favorite moments is when the original Mokona (from the Rayearth 2 manga) flies by and meets the Mokona and Modoki starring in the video. The new video features the songs action! by Sakamoto Maaya (for the main clip) and Oh! Yeah!! by Round Table featuring NINO (for the ending).

In Summary:
Despite the short run-time, this disc is definitely a must-have for all fans of CLAMP’s works. The lack of extras on the disc itself is more than made up for by the beautiful inserts and booklets. Even if you’ve never read or seen very many of CLAMP’s works, this is still a disc that I would highly recommend to anyone who enjoys good music, great video editing, and beautiful artwork.