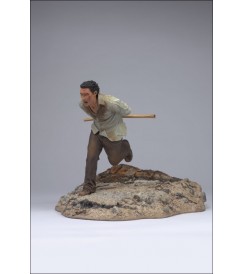 Quick overview
Within our on-line webstore we provide LOST S.2 JIN AF produced by MCFARLANE TOYS, synonym of high quality, made ​​of PVC and furnished packed in a BLISTER. This is an occasion not to be missed for the fans!

Inspired by LOST Season 2, Episode 2, "Adrift." Jin is a non-English-speaking Korean who helps build the doomed raft at the conclusion of LOST Season 1. When the voyage meets with disaster he goes missing, later found to be a prisoner of the Others. In a frantic attempt to escape, Jin runs from his captors, warning Sawyer and Michael of their imminent danger.

Prop: Includes a full-scale replica of pages from Sun's translation book. At the conclusion of Season 1, Jin's wife Sun gives him a booklet of Korean-to-English translation so that he can communicate with Sawyer, Michael and Walt while on the raft. Sound: "Others! Others! Others! Others!" - "I love you." - Spoken in Korean: "I can't talk to anyone. I can't understand them. I need you, Sun." - "Everything is going to change" - Spoken in Korean: "Bahlie!" ("Hurry!").