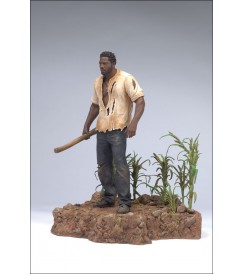 Quick overview
Within our on-line webstore we provide LOST S.2 MR ECKO AF produced by MCFARLANE TOYS, synonym of high quality, made ​​of PVC and furnished packed in a BLISTER. This is an occasion not to be missed for the fans!

Inspired by LOST Season 2, Episode 10, "The 23rd Psalm." One of the survivors from the tail section, Mr. Eko is a man of few words. He sees that Charlie has a familiar statue of the Virgin Mary, and is led to the wreckage of a small plane that holds the remains of his younger brother, killed in Africa a year before.

Prop: Includes a full-scale replica of the DHARMA orientation film frame. Eko finds a missing portion of the Dharma Initiative orientation film hidden within a Bible. When spliced into the portion of the film that Locke has found in the hatch, it reveals vital information to the survivors of Flight 815. Sound: "And tell your friends I let you live. That Mr. Eko let you live." - "I understand that you live in a world where righteousness and evil seem very far apart, but that is not the real world." - "Hello, I am Mr. Eko."